“Do not judge someone by night if you do not know what happened to them by day.” An adequate statement to describe the life of Oleg (Alexander Yatsenko), the drunken, impulsive paramedic who turns his wife Katya’s (Irina Gorbacheva) life into a living hell every night. Yet seeing Oleg work within a bureaucratic health system where correct paperwork holds more value than patients’ lives, helps us understand why his relationship with Katya swings from love to contempt in waves that are frantic and erratic, like an arrhythmic heart.
Director Boris Khlebnikov masterfully paints a map for viewers’ emotions. We adjust our feelings towards Oleg’s actions as we grow more familiar with what he faces at work on a daily basis. Administrative corruption turns his job as a paramedic into a game where he attempts to elude death every day, and he is expected to lay his humanity and experience aside to follow orders. His boss says it straight out to him once: “It doesn’t matter if they die, but they should die on someone else’s watch.”
Yet Arrhythmia isn’t a film about the corruption of the Russian health sector, even though it brims with details about the issue. It is in fact a film about love, in its basic form. The love that grows in the hardest of circumstances, faces the harshest of challenges, only to come back afloat, letting us know that no passion counts if it cannot save a person from the calamities of the everyday. 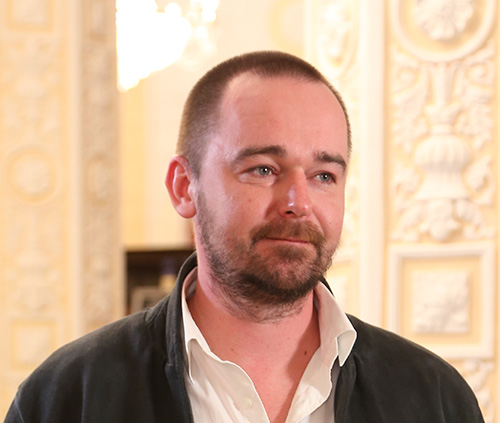 Born in Moscow on 28 August, 1972. He wrote and directed his first feature, Roads to Koktebel, in 2003, winning the Special Jury Prize at the Moscow International Film Festival and the Philip Morris Award from the Karlovy Vary International Film Festival. He went on to direct six films in 14 years, most of which were selected to articipate in major film festivals around the world. Both Free Floating (2006) and Crush (2009) were screened at the Venice Film Festival, while Help Gone Mad (2009) and A Long and Happy Life (2013) were both selected at the Berlinale.