Talent against disability. An occasional fact of life, generating endless stories. The latest feature by British director Michael Radford, well-known for his literary adaptations including fellow Englishman George Orwell’s 1984, is a melodramatic celebration of human willpower, strengthened by an overwhelming desire to assert itself, and a determination to confront its limitations and others’ doubts.
Amos is born with a divine gift: an unparalleled vocalistic capacity, unique in its power and scale. His eyes, however, suffer from a serious condition, evolving into total blindness after a football injury he sustains later. And yet he does not give up.
The film is based on the stirring memoir written in 1999 by iconic tenor Andrea Bocelli, who—along with contemporaries Luciano Pavarotti, José Plácido Domingo, and José Carreras—form the glorified modern face of classical opera. Throughout the chapters, Bocelli records details of his personal whims, torments, dreams and adventures, in addition to the generous presence of the people who surrounded him with love and support, starting with his mother and his Uncle Giovanni, to the “Maestro” (played by Antonio Banderas in the film), who teaches him the defining lesson: the Music of Silence will be his guide to self-discovery, leading him in the end to artistic perfection.
Radford films Bocelli’s life with unwavering loyalty, adopting a linear narrative of its richly complicated events, from the day Amos is born to the shocked discovery of his poor eyesight all the way to the rise of his musical stardom. The underlying value is sheer determination against submission, fear, and self-deprecation. It is a conflict between a fiercely independent creature unwilling to be hindered, and the fates that sought to bind him to a disabled body. 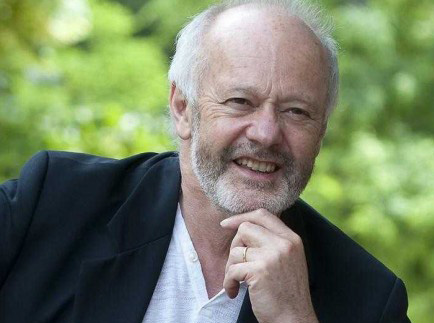 Michael Radford was born in New Delhi in 1946. He studied directing at the National Film and Television School, and started his career by making documentary films for the BBC. His debut feature Another Time, Another Place (1983) was met with popular and critical acclaim, which grew with his adaptation of 1984 one year later. His 1994 film The Postman was nominated for five Oscars, including Best Director. Other notable works of his include White Mischief (1987) and The Merchant of Venice (2004).