On a Saturday at nightfall, 18-year-old Lucía leaves handball training and sets off to pick up her brother in a city she thinks she knows. A cry for support to build an institutional and social framework in which all women feel safe and secure, 16 December reflects the case of “La Manada,” when a group of five men raped a girl in Pamplona, Spain, and recorded it all on a mobile phone. The film premiered at the 72nd Locarno Film Festival. 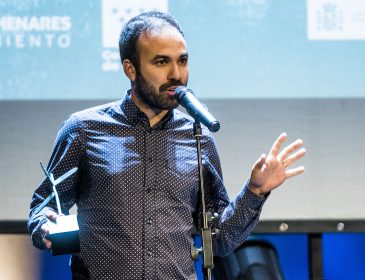 Alvaro Gago graduates in Audiovisual Communication and Music in Spain, theatre studies in Chicago and filmmaking in London. His first two short films, CURRICÁN and BOMBOLLES play and win awards at several film festivals. With MATRIA received the Grand Jury Prize in Sundance, and was a 2019 Goya nominee. Xacio Baño’s first feature film TROTE, which he edited, had its world premiere at the 2018 Locarno Film Festival and premiered nationally at the 2018 San Sebastián Film Festival. He also edits Marcos Merino’s second feature film IN MEMORIAM, which premiered at the 2018 Seville European Film Festival picking up ‘Best Spanish Film’ within the New Waves Non-Fiction category. His last short film 16 DE DECEMBRO will have its international premiere at Locarno Film Festival. He is currently developing his first feature film script provisionally titled ABOUT HAPPINESS.