El Gouna Film Festival (GFF) continues to build on the collaborations it has initiated to empower Arab filmmakers, promote projects and films at various stages and enhance co-production and distribution opportunities, especially outside the Arab world.

As part of these collaborations, GFF, in partnership with the Final Cut in Venice workshop, offers a US $5,000 cash prize and an invitation to participate in GFF’s industry arm CineGouna Platform for an Arab project. We are happy to announce that the recipient of this year’s award is The Blue Inmates (Lebanon) by Zeina Daccache. As the Lebanese Penal Code stipulates that “Insane” offenders shall be incarcerated until “Being Cured”, the film portrays these offenders’ stories through the eyes of “normal” inmates in Roumieh Prison who took the roles of their fellow mentally ill inmates in a theatre play. The film also won a €5,000 cash prize from Organisation Internationale de la Francophonie. 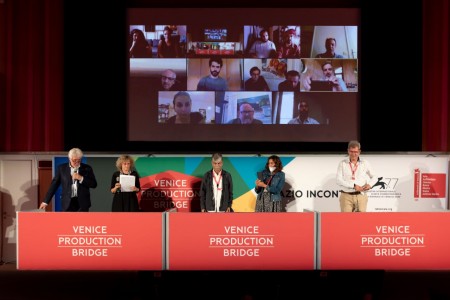 Ely Dagher’s Harvest (France, Lebanon, Belgium, USA) won the official jury prize for the best film in post-production and total prizes with the value of €25,000. The film follows Jana who makes her way back to her parents’ home in the middle of the night after having been abroad and out of touch for a while. She finds herself in a familiar yet strange environment with no choice but to fully immerse herself into the city she was once eager to leave. Harvest was chosen as the best project in development, receiving a CineGouna Platform certificate and cash prize of US $15,000, as well as US $15,000 from Drosos Foundation during the 3rd edition of CineGouna Platfrom. The film was also selected among CGP’s films in post-production this year.

Last but not least Soula (Algeria, France) by Salah Issaad won awards with the value of €54,000.

The 8th Final Cut in Venice workshop was held from September 7 to 9, 2020 during the Venice Production Bridge of the 77th Venice International Film Festival. The Final Cut in Venice workshop provides opportunities for six film projects in the production stage by filmmakers from Africa and the Middle East, to facilitate post-production processes and strengthen partnerships between these projects and film markets. The workshop runs through three days of activities, presenting projects to producers, buyers, distributors, post-production companies and festival programmers.