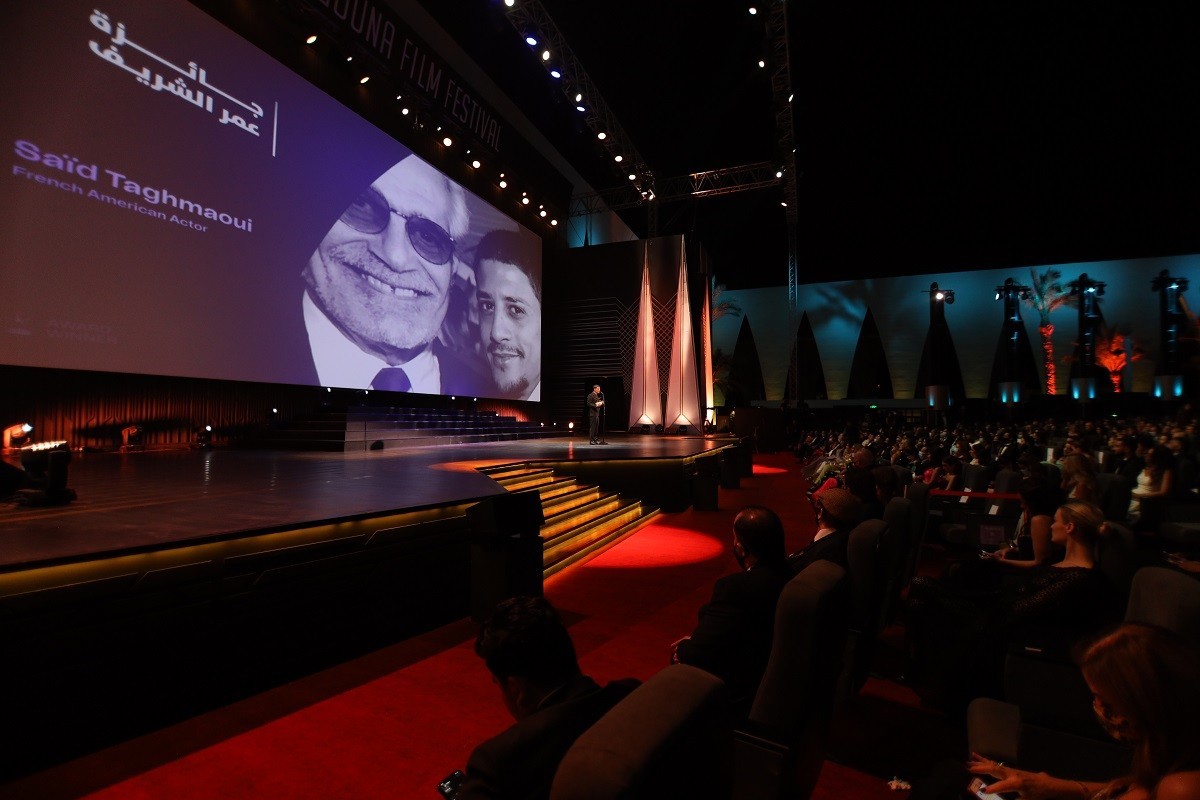 Amidst strict precautionary measures, a dazzling festive atmosphere, and a global media and artistic presence, the 4th edition of El Gouna Film Festival was launched, which began with a song by Lebanese singer Rami Ayash, then the ceremony was presented by Lebanese media presenter Hilda Khalife. Governor of the Red Sea Governorate, Major General Amr Hanafi, gave a speech, Engineer Samih Sawiris, founder of El-Gouna, in turn thanked the efforts of the late Khaled Bishara, presenting a souvenir to his wife after she was summoned to the stage amid a warm welcome by the audience. In agreement with the festival, Mrs. Bishara announced a new annual award to support independent film initiatives, under Khaled Bishara’s name.

This was followed by a speech by Intishal Al Timimi, Director of the festival, who shed light on the difficulties that the festival had faced this year, and how its proficient team managed to overcome them. Al Timimi then presented the 4th edition jury members.

Egyptian actor Khaled El Nabawy then awarded the Omar Sharif prize to the French-Moroccan artist, Said Taghmaoui. Followed by Egyptian star Sherine Reda, who gave a speech about her late father, iconic choreographer and dancer Mahmoud Reda. The word was followed by a dance performance by the Reda Troupe of folk performance.

Today—the second day of the 4th edition of El Gouna Film Festival—witnessed a distinguished assortment of performances and activities, and a press conference for actor Said Taghmaoui, recipient of the Omar Sharif prize. The press conference was held at the headquarters of the Technical University of Berlin at 11:00 a.m. Taghmaoui addressed the beginnings of his career, how he managed to reach the international audiences, and being very affected by yhe golden era of Omar Sharif, making his reception of an award under the late star's name much more special.

At twelve noon, the exhibition of the great production designer Onsi Abu Saif was inaugurated, with great turnout of stars, including: Bushra, Chief Operations Officer and the Co-founder of the festival; Saeed Taghmaoui; and Festival Director, Intishal Al Timimi. Abu Saif was keen to accompany the Moroccan artist, Taghmaoui, on a tour inside the exhibition, explaining the details of his awards and the works he had presented over the course of his artistic career.

As for film screenings, the screening of Italian film Bad Tales by Damiano and Fabio D'Innocenzo—winner of the Silver Bear Award for Best Screenplay in the 70th Berlin International Film Festival, and participant in GFF’s Feature Narrative Competition— began at 2:45 pm. The opening movie, The Man Who Sold His Back, by Kaouther Ben Hania, was also re-screened.

From the Feature Documentary Competition, Their Algeria (Algeria, France) directed by Lina Soualem, was screened. The film revolves around the director’s Algerian grandparents, monitoring their lives in exile, where they lived as a married couple for more than sixty years, after which they decided to quietly separate. The Furnace was also screened today as the first red carpet screening, directed by Australian director Roderick MacKay and starring young Egyptian actor Ahmed Malek.

The festival screens a number of distinguished films participating in its various sections, including: Oasis by Ivan Ikic; Spring Blossom by Suzanne Lyndon; Beginning by Déa Kulumbegashvili; and Days of Cannibalism by Teboho Edkins. The red carpet shows also include the screening of the film 200 Meters by Ameen Nayfeh, which won the audience award in the Venice Days section of the 77th Venice International Film Festival.

In addition, the activities of the 4th edition of CineGouna Bridge will be launched, which includes a lecture by the famous Indian actor Ali Fazal and moderated by Bushra Rozza. Fazal talks about his long creative career, his arrival to Hollywood and his acting with the brightest names of the film industry. The panel discussion also includes the United Nations High Commissioner for Refugees and the Sawiris Foundation: Children are Important, moderated by the well-known media presenter Raya Abirached, with the participation of professor Karim Atassi, representative of the United Nations High Commissioner for Refugees in Egypt and the League of Arab States; and engineer Noura Selim, Executive Director of the Sawiris Foundation For Social Development; ambassador Dr. Haifa Abu Ghazaleh; and Syrian actress Kinda Alloush, in addition to the virtual participation of Lebanese director Nadine Labaki.