El Gouna Film Festival continues to pay tribute to renowned filmmakers and cinematic legends who left iconic imprints on the seventh art. This year, the festival commemorates the late Polish director Krzysztof Kieślowski on the 25th anniversary of his passing by dedicating its Special Presentations section to some of his most celebrated films. GFF will also honor the late director’s life and works in its annual retrospective exhibition.

Festival director Intishal Al Timimi commented, “It has always been at the heart of our mission to stay committed to celebrate the past cinematic art by dedicating our retrospective program to remember the great masters of film. This year, we pay homage to the cinematic genius of Kieślowski’s—a visionary filmmaker who was able to dramatize intellectual concepts in a unique artistic manner and  position himself as one of the strongest voices in Polish cinema.”

Artistic director Amir Ramses added, “Remembering Kieślowski after 25 years is a tribute not only to his brilliant films, but also to the artist who inspired generations of filmmakers. Through his movies, he invented a new cinematic language and taught us that cinema can speak through image, color and music.” 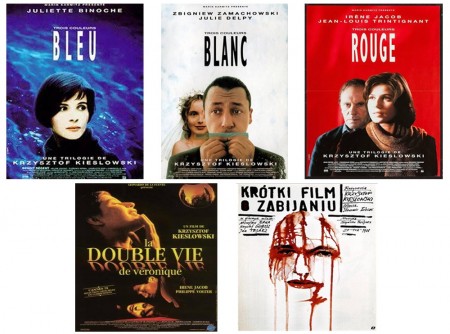 GFF will screen The Double Life of Véronique (1991), winner of the Prize of the Ecumenical Jury and the FIPRESCI Prize at the 1991 Cannes Film Festival, as well as the Best Actress Award for Irène Jacob. The film explores two parallel stories about two identical women: one living in Poland, the other in France. They don't know each other, but their lives are nevertheless profoundly connected.

The Three Colors Trilogy (1993, 1994), a collective title of three films named Blue, White, and Red representing the colours of the French flag, will also be screened at GFF. The story of each film is loosely based on one of the three political ideals in the motto of the French Republic: liberty, equality, and fraternity. The films received universal acclaim upon their releases. Blue won the Golden Lion and the Volpi Cup for Best Actress for Juliette Binoche at the Venice Film Festival, as well as the César Award for Best Sound, Best Film Editing and Best Actress for Binoche. White received the Silver Bear Award at the 1994 Berlin Film Festival, and Red was nominated for three Academy Awards, including Best Director for Kieślowski, Best Cinematography and Best Original Screenplay, three BAFTA Awards for Best Director, Best Original Screenplay and Best Film not in the English Language, as well as the Golden Globes for Best Foreign Language Film.

Another notable mention is A Short Film About Killing (1988), which follows a soon-to-be lawyer who crosses paths with a taxi driver and a young sinister man. The film won both the Jury Prize and the FIPRESCI Prize at the 1988 Cannes Film Festival, as well as the European Film Award for Best Film.

Born in 1941 in Poland, Kieślowski's early career witnessed his exclusive focus on documentary films. He first gained the attention of the international film community in 1979 with the release of his feature drama Camera Buff. In 1988 Kieślowski began working on his ten-part television miniseries The Decalogue. Using the vehicle of a group of tenants in a Warsaw housing project, each installment in the series illustrated one of the Ten Commandments. Later, he turned two episodes of the critically lauded series into feature films A Short Film About Love and A Short Film About Killing. These releases raised Kieślowski's status internationally, which he later topped with the release of The Double Life of Véronique. His Three Colors Trilogy is considered his most internationally celebrated and critically acclaimed work to date.

One of the leading festivals in the MENA region, GFF aims to showcase a wide variety of films for a passionate and knowledgeable audience, while fostering better communication between cultures through the art of filmmaking. Its goal is to connect filmmakers from the region with their international counterparts in the spirit of cooperation and cultural exchange. The festival is committed to the discovery of new voices and strives to be a catalyst for the development of cinema in the Arab world, especially through its industry arm, CineGouna Platform.